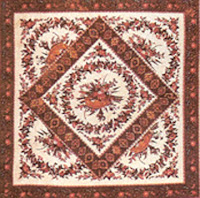 Detail of a chintz quilt from the Alston family,
South Carolina
In early 1813 the wife of South Carolina's Governor disappeared at sea. Theodosia Alston was aboard the Patriot, a small ship that sailed into a January storm near Cape Hatteras. The Patriot was a privateer, one of a flotilla of boats fighting for the United States. Neither pirates nor official Navy, privateers badgered English commercial vessels, capturing "prizes" and their cargoes.
The swift and sleek Patriot had been a prize itself, a British ship commandeered by Americans to harass blockading ships and capture clumsier merchant mariners. On this trip to the port of New York she was rumored to be delivering a fortune in imports confiscated in the Caribbean. 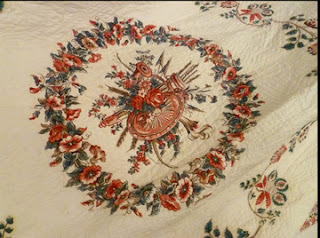 These panels printed in Britain are attributed to the teens;
an example in a quilt in Donna Stickovich's collection.
Dates on the quilts made from them are open to question.
Mrs. Joseph Alston was accepted as a passenger due to her connections. Not only was she South Carolina's new first lady but also the daughter of Aaron Burr, former vice-president of the United States. Her father's friend Timothy Green obtained passage for Theodosia, her maid and himself as companion to the fragile and depressed woman who was desperate to see her father.

Perhaps sharing their grief over the recent loss of her only son Aaron Burr Alston, a ten-year-old malaria victim, would offer relief. The senior Burr had just returned from European exile after a decade of disgrace beginning with his fatal duel with Alexander Hamilton and then an alleged plot for a treasonous takeover of the southern frontier. 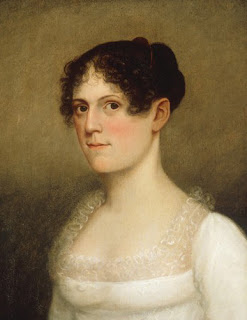 Theodosia Burr Alston by John Vanderlyn
Green wrote to Burr: "I have engaged a passage to New York for your daughter in a pilotboat that has been out privateering ....My only fears are that Governor Alston may think the mode of conveyance too undignified, and object to it; but Mrs. Alston is fully bent on going. You must not be surprised to see her very low, feeble, and emaciated. Her complaint is an almost incessant nervous fever." 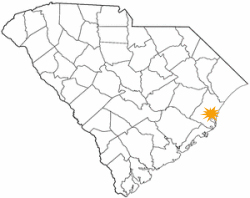 Georgetown in Carolina's Low Country was a large port
The Governor, inaugurated a few weeks earlier, saw them off on December 30th for the planned eight-day voyage from Georgetown to New York. Theodosia was 29 years old, a well-loved wife and doted-upon daughter whose widowed father had viewed her as a living experiment. She was raised according to the radical principles defined by Mary Wollstonecraft in her book Vindication on the Rights of Women. Theodosia received the kind of education reserved for men and to the surprise of some she bloomed under those advantages. The brilliant young woman was viewed as a prodigy.
At 18 she married Princeton graduate Joseph Alston, heir to a Carolina rice plantation fortune, son of a man so rich and powerful he was known as King Billy. They were both bright; Joseph told her he'd been raised as a "hot house flower" himself by a father who treated him as an adult after his mother's death.  Joseph's father married again to Mary Motte who probably made the quilt now in the Smithsonian. 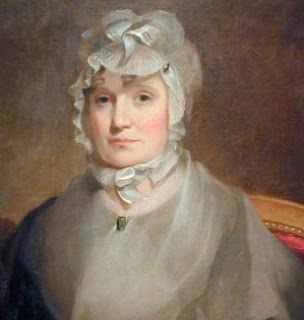 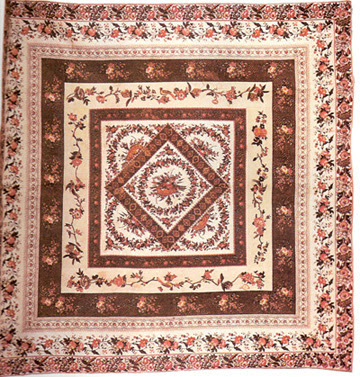 The quilt came with the attribution:
from the family of Mary Brewton Motte Alston.
Collection of the Smithsonian Institution.
Gift of her great-grandson Pierre Pinckney Alston Trapier.
Theodosia's husband managed over 6,000 acres of rice plantations farmed by over 200 slaves. Alston  was elected Governor in the year the war began. But young Aaron Burr Alston's death of the "summer complaint" rampant along the coastal waters took any joy out of their political triumph. 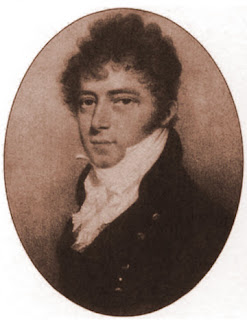 The facts seem to be that the Patriot was last seen by a British blockade ship, which let them continue due to papers of safe passage . On January 2nd an Atlantic storm exploded. In a letter to his lost wife Alston wrote:
'Another mail, and still no letter! I hear, too, rumours of a gale off Cape Hatteras the beginning of the month! The state of my mind is dreadful." 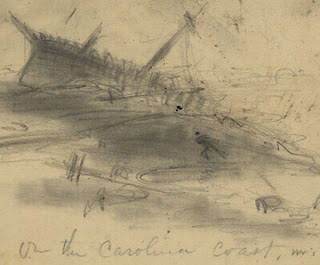 Wrecks along the Carolina coast were common.
Decades later Alfred Waud sketched this one.
It was hard to blame fate. How could a man (a rich and powerful man) who'd just lost his son to disease lose his wife to weather? Easier to blame the British or the pirates that sailed the same waters. Stories grew throughout the 19th century. Theodosia was a British prisoner of war; she'd been forced to walk the plank. Tales persist that in her luggage on the Patriot was a portrait in white meant for her father---a painting later found hanging in a hut along the Carolina coast, handed down in a pirate's family. Over the decades newspapers repeated death-bed confessions by self-styled pirates. Theodosia's ghost still walks the sands off Cape Hatteras...

Theodosia Burr has no reputation as a seamstress. A friend of her father's described her as "an utter stranger to the use of the needle," so she is not a candidate for maker of the Smithsonian's quilt that descended in Joseph's family. Mary Brewton Motte Alston, the likely maker, was remembered as a needleworker. Her grandson recalled: "While she would knit [she told] me of her early life."

A very similar quilt using the same panel is in the collection of the Charleston Museum. 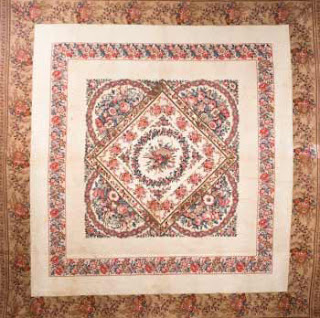 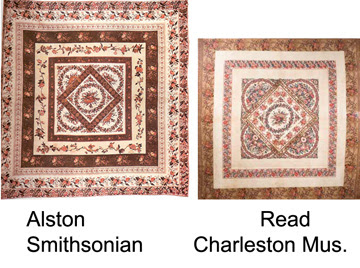 The similarity of these quilts may be explained by the families being relatives and neighbors in their winter residence on their plantations near Georgetown and their city residences in Charleston. 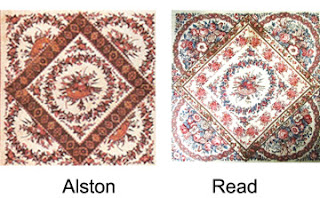 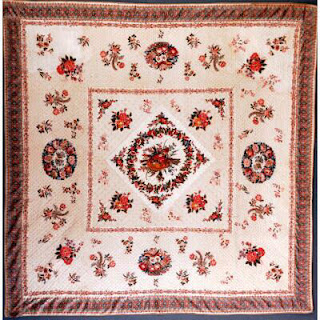 The Newark Museum has another quilt featuring The Trophy of Arms panel. 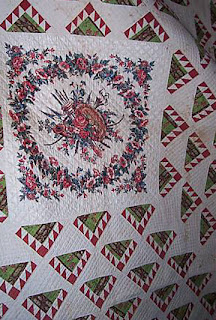 The panel as center focus in a block quilt, probably from about 1840.
The panels are attributed to the teens but people seem to have saved them. 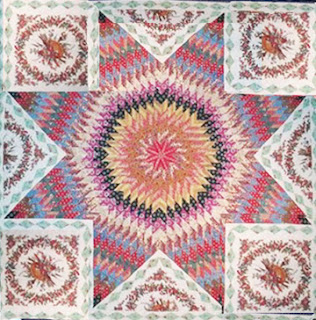 A few years ago at Quilt Festival in Chicago this quilt hung in the America Collects show. It was hard to photograph so I have done a digital reconstruction of it eliminating the poles and the people in the way. It had a dark chintz border. 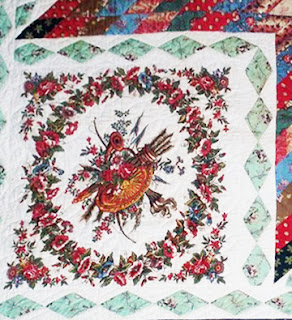 Each corner had a panel and two were cut in half for the sides.
It was attributed to about 1845 when these stars were so popular. 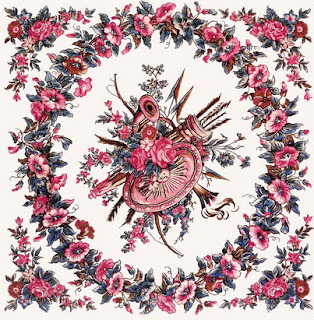 Reproduction Fabrics offers a digitally printed reproduction of the panel
http://www.reproductionfabrics.com/shelf.php?ID=139
In April the topic will be panels.
Here are some links:
Donna is lucky enough to own a panel quilt. She compares the original and repro here:
http://donna-stickovich.blogspot.com/2011/04/reproduction-broderie-perse-panel.html
I blogged a little about panels last year:
http://barbarabrackman.blogspot.com/2011/05/war-piecing-1812-2012.html 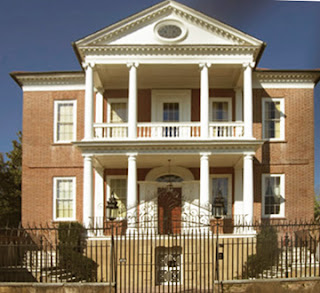 Theodosia and the Alstons
lived together at this Charleston house
The Miles-Brewton House
How did Theodosia get along with Joseph's stepmother?
Here's a glimpse into the Miles-Brewton house from Theo's letter from to her father in 1811:
"[My husband] is kind to me in everything, but his family *******"
Richard N. Côté has written a biography: Theodosia Burr Alston: Portrait of a Prodigy.
He's also written about the women of the Alston family, primarily Mary Brewton Alston Motte's daughter, another Mary, in Mary's World: Love, War, and Family Ties in Nineteenth-century Charleston.


Your library may have a copy of
Correspondence of Aaron Burr and his daughter Theodosia (Covici-Friede, 1929) published in a small edition.
See the closest library copy here at WorldCat
http://www.worldcat.org/title/correspondence-of-aaron-burr-and-his-daughter-theodosia/oclc/000504402

Read a typical letter from father to daughter:

http://www.familytales.org/dbDisplay.php?id=ltr_aab2435&person=aab
This online resource for letters has dozens from the loving if exacting parent. 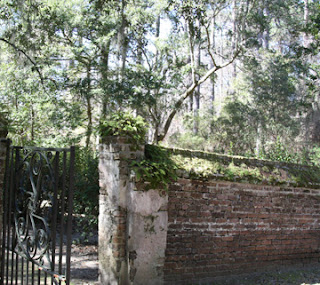 Theodosia's son is buried at the cemetery
at their Oaks Plantation near Georgetown.

You are my favorite storyteller!
And maybe it is you who has woken up this huge desire to use old blocks, old fabrics, and repros in my work...

I enjoy your history lessons and the quilts you feature. Thanks so much for sharing your knowledge with us in such a pleasant way.

I'm unfamiliar with the category "panel quilt". I would have called these quilts "broderie perse". What makes a quilt with isolated chintz motifs arranged on a white background a "panel quilt"? Is it because the motifs were not cut out of the yardage they were printed on before they were integrated into the quilt design? Are there contemporary "panel quilts" being made now (other than reproductions)?

Suzanne-You will have to read the posts all month. I will try to address those questions. There are contemporary panel quilts made from pictorial panels with licensed characters on them. Lots of kid's quilts.

I was delighted to come across your blog of April 1, 2012, featuring the Trophy of Arms chintz panel. I have a quilt with this panel in the center circled by chintz floral bouquets c. 1835 and red "dogtooth" borders. It was pictured in Quilts of Virgina (Virginia Consortium of Quilters). It's always interesting to find new examples, and your blog pictured several I had not previously seen. I'd be happy to talk more with you about our quilt and email you a photo, if you are interested. Looking forward to discovering more!
Kathie Ratcliffe 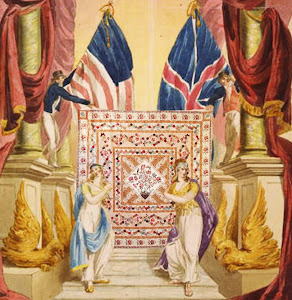 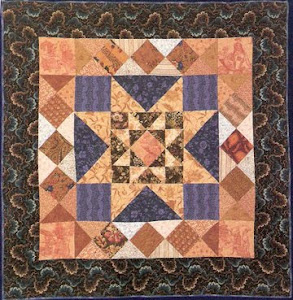 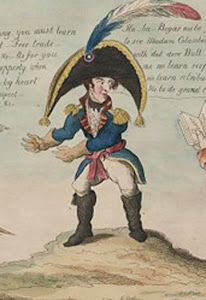 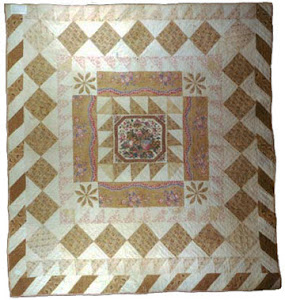 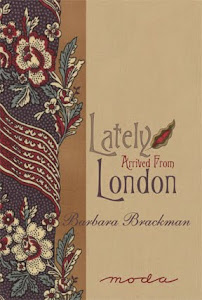 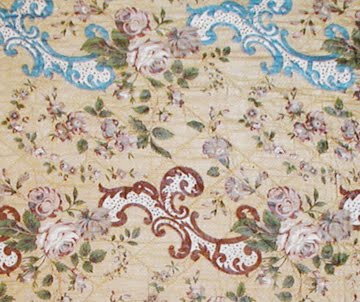 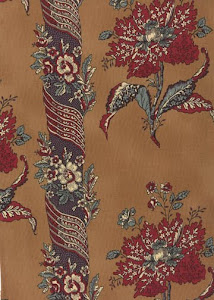 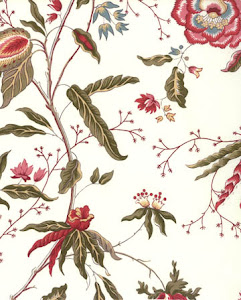 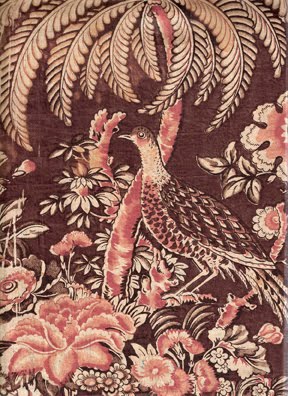 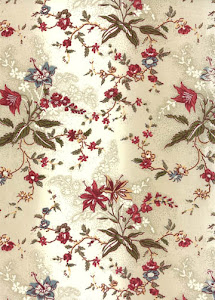